HomeTECHNOLOGYHolograms: What Can Be Done With Deep Learning
TECHNOLOGY

Holograms: What Can Be Done With Deep Learning 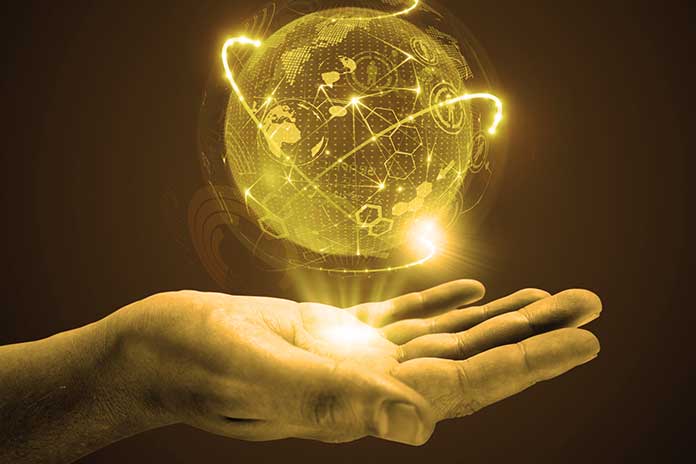 The term indicates a specific technique for viewing images in three dimensions: creating a parallactic image through laser light beams. But it is with artificial intelligence that holography has leapt forward.

What Is A Hologram: The Meaning

The term hologram indicates a specific technique for viewing images in three dimensions or, in a technical sense, creating a so-called parallactic image through laser light beams. More generally, holograms are stereoscopic three-dimensional images that take on different perspectives depending on the point at which they are observed. The Hungarian physicist Dennis Gabor theorized and invented the first hologram through green light beams generated by a mercury vapor lamp.

This discovery, which made Gabor obtain the Nobel Prize in 1971, was not exploited until the early 1960s, a period in which the so-called highly coherent laser light sources began to appear, i.e. the constant phase difference over time (as opposed to natural light, which is defined as highly inconsistent). The characteristic constancy of the laser light allows for accurately reproducing a previously recorded image by combining two laser beams: the first is diffracted from the object, while a mirror reflects the second; the second laser beams are then made to interfere with each other.

This is how a three-dimensional photographic effect is generated that also allows us to perceive the third dimension, unlike the simple projection of an image onto a surface. Another peculiarity of the hologram is that it contains all the information on the object to be reproduced: even if the hologram were to be cut into two parts, the thing would always be represented in its entirety. The constancy of the laser light phase is also used in surgery, as it allows high-precision microscopic interventions to be carried out, limiting the degree of invasiveness of the operation as much as possible.

How A Hologram Works

As previously anticipated, holography is a unique photographic technique in which 3d objects are reproduced via the interference of light waves created by laser light. When the laser illuminates the holograms, they can make the exact 3d clone of the object and duplicate its characteristics. Here is in detail how the hologram is created through a real game of mirrors:

Through this process, the viewer will thus be able to see the image in three dimensions as if it were physically present. Thanks to technological progress, it is now possible to create on a large scale holograms visible through white or solar light. Printed holograms, similar to those on banknotes or credit cards, reproduce an image through the diffraction of the morning on transparent plastic support, placed above a silver surface.

In practice, this is a natural optical illusion.

What Is A Holographic Pyramid?

The holographic pyramid is a display with four symmetrically opposite projections made of glass or other transparent material. You can observe what happens in the pyramid’s center from each side. The image generated in the pyramid’s center in 3d reflects each projection that forms a full floating figure. The holographic pyramid is used extensively in advertising and marketing to project any element in 3 dimensions (products, people, logos, etc.).

3d Holograms, Thanks To Artificial Intelligence

Scientific research relating to holograms aims to improve their visibility and intersect their functions with other innovative technologies, such as augmented reality (AR), virtual reality (VR) and artificial intelligence. In particular, a study conducted by researchers from the Massachusetts Institutes of Technology (MIT), co-funded by Sony and published in the scientific journal Nature has shown how, thanks to a new deep learning method called tensor holography, it is possible to generate a holographic video in an instantaneous, exploiting the computational capacity present on a simple computer.

The peculiarity of the artificial intelligence created by MIT is that it is composed of trainable tensors, which can learn how to process visual and depth information in a similar way to what the human brain does. Unlike what happens for “traditional” holographic images, which require to be generated by a computer, and enormous computational and memory capacity (having to process the depth of the image for each pixel based on the viewer’s position ), the researchers found that tensor holography was instead able to generate 3D holograms from typical computer-generated photos with depth data, calculated from a multi-camera setup, in just a few milliseconds.

This is made possible thanks to a neural network which, as mentioned, imitates how the human brain processes all visual information; the neural network was then trained through a database made up of over 4,000 computer-generated images, in which the information relating to colour and depth, with the relative holograms, were indicated for every single pixel. By analyzing the dataset, the neural network learned how to calculate the optimal way to generate the holograms, producing them in a few milliseconds and using less than a megabyte of memory.

In some ways, he adds, computer-generated holography is a bit like figuring out how to cut a cake. Using physical simulations to calculate the appearance of each point in space is a time-consuming process that resembles using eight precise cuts to produce eight pie slices. Using lookup tables for computer-generated holography is like marking the boundary of each piece before cutting. At the same time, this saves some time by eliminating the step of calculating where to cut. Completing all eight cuts still takes a long time.

In contrast, the new technique uses deep learning to understand how to cut a cake into eight slices using just three cuts. The convolutional neural network (NDA, a network in which individual neurons are arranged in such a way as to emulate the organization of the visual cortex) learns the shortcuts to generate a complete hologram without having to separately calculate how each piece of it looks while reducing the memory required to create it.

The new system requires less than 620 kilobytes of memory and can generate 60 color 3D holograms per second at a resolution of 1,920 by 1,080 pixels on a single consumer-grade GPU. Researchers could run it with an iPhone 11 Pro at a speed of 1.1 holograms per second and on a Google Edge TPU at a rate of 2 holograms per second: it follows that if this technology were widespread on a large scale, it would be in possible future to generate holograms in real-time on mobile virtual reality (VR) and augmented reality (AR) viewers.

Real-time 3D holography could also help improve so-called volumetric 3D printing techniques, which create 3D objects by projecting images onto vats of liquid, generating complex hollow structures. It could also be used to develop optical and acoustic tweezers helpful in manipulating matter at the microscopic level, as well as holographic microscopes capable of analyzing cells and conventional static holograms for the fields of art, security, and archiving. Data and more.

Until now, holographic technology, due to the enormous costs associated with its use, has been the prerogative of a few: however, the latest research developments suggest that, in a not so distant future, thanks to artificial intelligence and the growing increase in computing power worldwide, it will be possible to create increasingly accurate three-dimensional models within everyone’s reach, for the benefit of strategic sectors such as medicine and security.