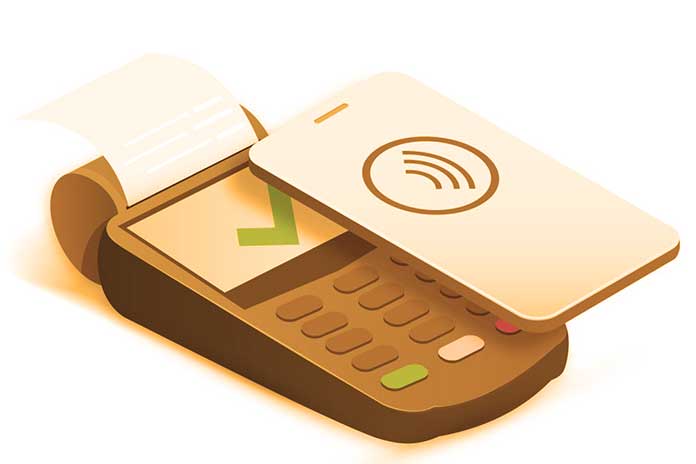 Have you heard about NFC technology and would you like to know what it is exactly? We’ll explain it to you.

With the help of NFC technology, you can make contact-free and cashless payments. Your payment data is transmitted over short distances by a chip by radio. In this article we will explain what exactly NFC is and how it works.

Pay via NFC contactless and without entering a PIN

NFC stands for “Near Field Communication.” It is an international standard for wireless data transmission over short distances. This allows you to pay by credit card, for example, without inserting it into a reader and entering or signing a PIN.

You can recognize NFC-enabled credit or debit cards by the radio symbol. They then contain an NFC chip that sends and receives data on a fixed frequency. The technology is based on RFID, a technology for identification using electromagnetic waves (Radio Frequency Identification).

You can tell from the radio symbol whether your bank card is NFC-capable. You can also use NFC to make contactless payments on your smartphone, for example, using apps such as Apple Pay or Google Pay.

The prerequisite for this is that your credit card or mobile phone and the reader at the checkout must be only a few centimeters apart. This makes paying with NFC pretty secure. Because if someone wanted to intercept or manipulate the radio signals, they would have to get very close to your wallet or cell phone.

To avoid taking any risks, you can usually only pay small amounts via NFC without entering your PIN, usually up to 25 euros. You can also keep your bank card in a particular case that shields the radio signals. In this way, you prevent data such as your card number from being read without authorization via NFC.

Other areas of application for NFC

You can use NFC to pay; you can also use it to transfer data – for example, between two smartphones. NFC is much slower than Bluetooth but a bit more secure because the devices have to be very close to each other. For smaller amounts of data such as numbers or codes, NFC is sufficient, so you can use it to send links or contacts, for example.

This means that so-called NFC tags can also be used as an alternative to QR codes, for example, on posters. The tags are small chips with NFC functionality that contain information. You can read this out with an NFC-enabled device and receive a link to the band’s website from a concert poster, for example.