HomeGADGETSWhat Are The Best 4K TVs In 2023?
GADGETS 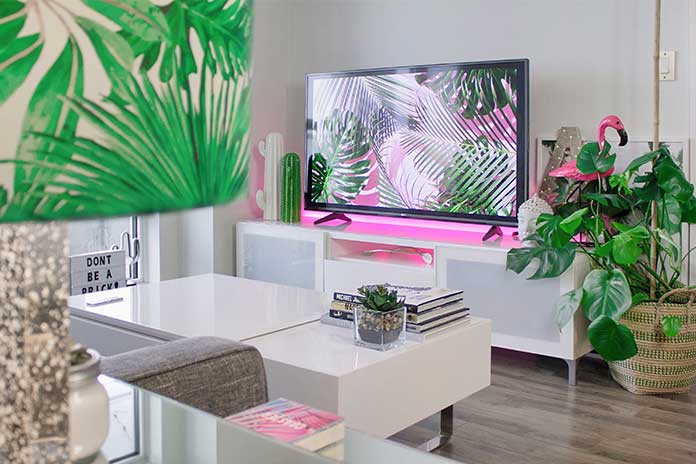 What better than replacing your old HDTV with a 55-inch or larger OLED flat screen? You could watch your favorite films and series or follow the World Cup matches with an immersion worthy of cinemas.

The problem is knowing which model to choose … Samsung, LG, Sony, etc., the numerous brands, as are the display technologies (OLED, QLED, LCD, MiniLED, etc.). To help you in this task, we have selected the best 4K TVs for the end of 2022.

We do not present the South Korean brand LG. Its range of products is wide enough to please everyone, with prices ranging from less than 500 € to more than 3000 €. The LG OLED 55C2 model is halfway between the brand’s best TVs and entry-level models. It will allow you to enjoy excellent image quality and an HDR experience without needing consumer credit.

LG’s 55C2 TV has an OLED Evo panel for a 4K Ultra HD display. Its resolution is 3840×2160 px for a size of 55 inches (139 cm). This display is equipped with a 5th generation α9 AI processor offering excellent pixel lighting control. Added to this is the “Brightness Booster Max” function, which increases the brightness of the C2 by 20% compared to the brand’s non-OLED Evo models.

But let’s go back to the processor in this TV for a moment. Equipped with state-of-the-art AI, LG 55C2 can automatically process the image to differentiate between foreground and background objects. It can thus add contrast to create an effect of depth. In summary, the LG 55C2 offers “onion-friendly” image quality enhanced by the Dolby Vision IQ mode.

On the audio side, you will find 2 speakers and 2 woofers of 10 watts each for 40 watts. This is compatible with the Dolby Atmos mode for total sensory immersion. This screen can also be used for gaming thanks to 4 HDMI 2.1 inputs. Its refresh rate varies between 100 and 120 Hz, guaranteeing a smooth image. As for the display delay, this is in the lower range of models of the same ilk.

It varies between 12.5 and 9.5 ms when Game Boost mode is activated. The TV is also compatible with FreeSync and G-Sync modes to further minimize input lag. In short, the LG OLED 55C2 is a television offering a high-quality display, contrast, and sound experience.

It is almost flawless on all points, although we could nitpick on a few details, such as the absence of a headphone jack or a brightness in HDR mode lower than the average for LCD screens. It is fully compatible with purely gaming use and demonstrates excellent responsiveness. Apart from that, this TV remains one of the best on the market for 2022.

Just like LG products, Samsung devices rarely disappoint in their quality. The QE55S95B TV is no exception. Its 55-inch screen (also available in a 65-inch version) marks the arrival of QD-OLED technology from the Korean manufacturer. Sony was the first to use this type of panel, quickly fueling the greed of its competitors, and rightly so! QD-OLED is a bit of a revolution in the Ultra-HD TV market.

Under the acronym “QD,” hide the words “Quantum Dots,” betraying the use of a quantum box to improve the backlighting of screens. Without going into technical details, remember that QD-OLED improves the light intensity and purity of RGB backlighting, weak points of traditional LCD screens.

De facto, this television can produce a record brightness of 1000 cd/cm 2 in Film Maker mode! This lighting capacity is even considered too high for other methods, but that remains at the discretion of each. Either way, the screen will be visible no matter how bright outside (thanks partly to the effectiveness of the screen’s anti-glare treatment).

In terms of technical performance, we find a refresh rate between 48 and 120 Hz, which is more than correct. The input lag is also irreproachable, with a measurement of 9.5 ms when the “Game” mode is activated. The sound quality is guaranteed by 6 speakers providing a total power of 60 W; enough for your neighbors to enjoy when the volume is at maximum… Dolby Vision will not be there (HDR10+ is taking over), but you can count on Dolby Atmos for total sound immersion.

Interesting points to mention, the Samsung QE-55S95B TV has 4 HDMI 2.1 inputs, a solar-charged remote control, and compatibility with voice assistants such as Alexa and Google Home; it even integrates Microsoft 365. All of this is managed by the 6th generation Tizen operating system. Suffice it to say that it goes beyond the simple framework of a television set.

What more can we say about this television screen, except that its price remains correct (around €2,000) for a Samsung device of this quality? Conversely, the complexity of the Tizen system may put off some people. This TV is for you if you like fiddling with settings and options galore.

From the top of its 55 inches, this model is in the brand’s high-end TVs category. The presence of the QD-OLED is felt in “cinema” mode, given the rendering of the image of a striking naturalness. The brightness is also there, exceeding the symbolic threshold of 1000 nits. In addition, this latest generation Sony TV also offers other modes such as HLG, HDR10, and Dolby Vision (HDR10+ is not included in this list).

For the audio part, for once, you can count on the presence of Dolby Atmos and its 360° sound distribution. This is supported by 4 loudspeakers displaying a total power of 60 W. We’ve discussed the Sony XR-55A95 K’s QD-OLED display, but what about the technical performance? First, we have a resolution of 3840×2160 px for 4K quality; that goes without saying.

We also have a native 100Hz sweep rate, going up to 120Hz if the display is used in “Game” mode. Speaking of gaming mode, you should know that this TV is compatible with VRR, FreeSync Premium, and G-Sync. Compared to its competitors, the input lag is not exceptional, without being disappointing; it is around 16 ms. Note also the presence of 2 HDMI 2.1 ports for compatibility with the latest game consoles (PS5 and Xbox Series X).

Two other HDMI 2.0 ports are also available to guarantee the image in 4K. The XR processor manages the device’s performance and is coupled with the Android TV operating system. It allows the download of many applications and compatibility with most voice assistants.

Finally, we will appreciate the presence of friendly little options such as the adjustable support, the backlighting of the remote control, and convincing performance for the “Video games” component. Despite everything, the price of this TV deserves to be lowered if Sony wants to remain competitive against its competitors offering models of similar quality.

Last, of our selection, the TCL 55C835 TV is an excellent quality device. Equipped with a QLED panel, it works with a Mini-LED backlight system. A party took the Chinese manufacturer surfing on the trend of this technology introduced by Apple last year. The Mini-LED backlight works based on tens of thousands of miniature LEDs allowing less diffuse lighting and, therefore, better color rendering.

Its purpose is similar to that of other QD-OLED-type technologies, seeking to reduce the defects inherent in LCD screens. It thus offers a more marked contrast between the colors and a better depth of the blacks. This technology is applied on a 55-inch screen displaying a full definition of 3840 × 2160 pixels for Ultra-HD quality. The display frequency is 100 Hz ( up to 144 Hz in VRR and ALLM ) for a total sound power of 35 Watts.

The latter is compatible with HDR10, HDR 10+, HLG, and Dolby Vision formats; it runs on the Android TV operating system. This implies the possibility of downloading applications from the Play Store or managing the TV through the most commonly used voice assistants.

The HDMI 2.1 ports and VRR compatibility allow gaming use of the screen, although the performance of the latter could be better for this. The connection also includes 1 USB port, a headphone socket, an Ethernet input, and Wi-Fi and Bluetooth connection possibilities. The excellent point is to be given to the audio component, which integrates an Onkyo soundbar with a Dolby Atmos compatible 2.1 channel system.

The microphone built into the TV also allows voice control of the latter. But all this hardly compensates for the power of the 20 Watt woofer and the two front speakers of 15 Watts each (for a total capacity of 35 Watts). Although very correct, it remains relatively low compared to previous models.

The world number 2 in televisions (and the third largest seller in France) offers us a TV that does not have to be ashamed of the competition. Less efficient than the others on specific points, it has a wide connection and offers a high-quality cinema experience, all for an attractive price (around 1000 €).

Perfect for family use, it is compatible with the latest multimedia technologies as well as the most popular streaming services (Netflix, Disney +, Amazon Prime, YouTube) and provides access to the catalog of applications from the Play Store.

A 4K TV is a television with 4K resolution, with a display of 3840 horizontal pixels and 2160 vertical pixels for a total of 8.3 million pixels. The term “K” stands for kilo, or 1000, to indicate that the horizontal resolution is approximately 4000 pixels. Note that the higher the screen resolution, the better the image will be, as it can show more details.

What Is The Difference Between A 4K TV And An LED TV?

A 4K TV displays a resolution of 3840 x 2160 pixels. We then speak of Ultra-HD or UHD TV. When we talk about LED TVs, we are not discussing the solution but display technology. In this case, it is a TV with an LCD panel operating with LEDs, that is to say, diodes—different display technologies, such as Mini-LED, OLED, or QD-OLED. However, the difference lies in the backlighting process and needs to consider the resolution. An LED TV can therefore be a 4K TV.

What Is The Difference Between 4K And HD?

The interest of 4K is to benefit from a better quality image. This will be all the more visible on the big screen. 4K allows for smoother image rendering and lets details appear more clearly. It is now a standard for modern televisions (pending the democratization of 8K…).

Ready to be amazed in front of your state-of-the-art TV? With the models we have just presented to you, you will have enough to make your loved ones jealous; no doubt they will insist on watching the match at home to take advantage of the exceptional quality of your screen.

Of course, many models would fully deserve their place in this selection. But with the few televisions we have presented, you now know what you can expect from the best 4K TVs for this year, 2023. With that, all that remains is for us to wish you good viewing!

Also Read: Google Wants To Develop Computers That React To Intentions And Actions

Smartphone: Do You Know These Hidden Tricks On Android?